Jonny Steede of Ballymena Runners gave another convincing performance to win the 35th annual Flagstaff to Carlingford Mountain race last Sunday 22nd June.
The race was run on one of the rare sunny days of the last 35 years and the 60 runners who started at Flagstaff all made it to the finish. The race was always between the 7 athletes who reached the Anglesey Mountain checkpoint first led by the eventual winner Jonny Steede of Ballymena Runners followed by long time record holder Deon McNeilly of Newcastle AC and Armagh’s Paul McAnespie. They were closely followed by Seamus Lynch of Mourne Runners, David Steele of Newcastle AC, Neil Carty North Belfast and Alex Brennan of Ballymena.
At the critical 3rd check-point on the Black Mountain, surmounted by the ancient passage-grave cairn, Jonny Steede was still leading narrowly from Seamus Lynch with Paul McAnespie a close third. Deon McNeilly was now 4th followed by David Steele, Alex Brennan and Neil Carty. This was mostly a result of route choice from Clermont Mountain where there is a choice of dropping down to the mountain road or staying on contour and taking your chance with the series of bog cut-offs that run East/West up to the junction of the road from Bavan. Decisions made between check-point 2 and 3 may well have decided the outcome of the race.
At the Windy Gap, which represents about two thirds of the overall distance but leaving at least 50% of effort with serious navigational and climb choices saw Seamus Lynch leading up the route to the Foxes Rock followed by Jonny Steede and Paul McAnespie. Deon McNeilly was 4th, David Steele 5th, Alex Brennan 6th and Neil Carty 7th.
The final check point on Slieve Foy had Steede leading from Lynch, McAnespie, McNeilly, Steele, Carty and Brennan. This was unchanged when the finish line was reached a short time later. 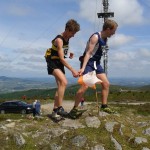 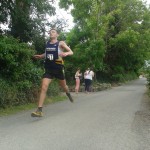 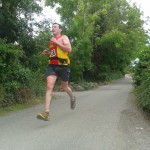 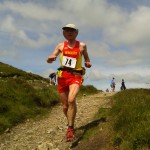 DRAMA ON THE DESCENT

Mountain runners are hardy survivors like stage cyclists and aren’t too surprised when they fall and face serious injury. They get up and run on. This was more than amply demonstrated when record holder Shileen O’Kane took a nasty fall on the precipitous descent of Slieve Foy and literally snapped her wrist. Shileen got up and ran on in terrible pain eventually crossing the line in a time of 2.04.25 and 21st overall out of a mixed men and women’s race of 60 starters. Winner of the women’s race Diane Wilson of Dromore AC added yet another sub 2 hour time to the women’s all-time record statistics. A total of 11 women completed the course with the Lagan Valley all female generic levaquin canada team taking 6th place overall.

The in-depth standard of this year’s race was impressive with no less than 16 runners completed the 11 Mile route with 3000’ of climb sub-2 hours. Then we had a total of 26 finishing under 2 hours 10 minutes and 39 recording sub 2 hours 30 minutes.

The responsibility of organising an A to B mountain race is nowadays fraught with challenge around the thorny issue of health and safety. In temperate island conditions there can be vast temperature and visibility changes over relatively small altitude variations and the Cooley Mountains are notorious for this. They are located in the direct line of the prevailing wind and pick up every drop of precipitation coming right across the midlands of Ireland uninterrupted from the Atlantic.
Armagh AC has been organising this race from the very early days of the Fell Runners Association and try very hard to get it right. This year with the help of both club runners and club officials a very good team of volunteers was put together. Brian Finnegan a former high performing multi-event athlete and Mourne Mountain Marathon finisher on more than one occasion was in charge of the first two check-points on Anglessey and Clermont Mountains. Danielle Fegan a representative runner for Northern Ireland looked after the 3rd check-point at Clermont Cairn. Kris Muldoon an International Triathlon athlete and former winner of the race managed the 4th check-point at Carnavaddy Cairn. Then at the Windy Gap we had Jim Finnegan joint pioneer of the first ever Flagstaff race and Gerry Hughes who has completed the course many times in charge. John Vernon looked after the Slieve Foy check-point which he first did as a very young teenager and a star track & field athlete with Armagh recording a 50 second 400M at 16 years of age.
The registration, timing and general organisation of the race was carried out by Mark McKeown, Jamesy Vallely, Eithne Valley and Brian Vallely.
As well as the various nominated marshalls there was an informal back up team from the Muldoon, Shevlin and McAnespie families as well as various boy-friends and girl-friends of the Armagh AC athletes.